It is a given that all games have at least rudimentary narrative dimensions and that if they setup to do so they can tell very elaborate stories. (Dr. Mark Butler)

Examples from the Slideshow:

How do games tell stories?

ALL Adventure Games have the same underline structure:

Two types of functional elements within an Adventure Game:

all interactive elements are DISTRIBUTED

Adventure Journey as a sequential Rite of Passage in which the theme of the setting can be variable.

Recurring themes in Adventure Games are:

The Future of Computer Game Storytelling

Challange for future game developers is to intertwine storytelling in the gameplay as seamlessly as possible: 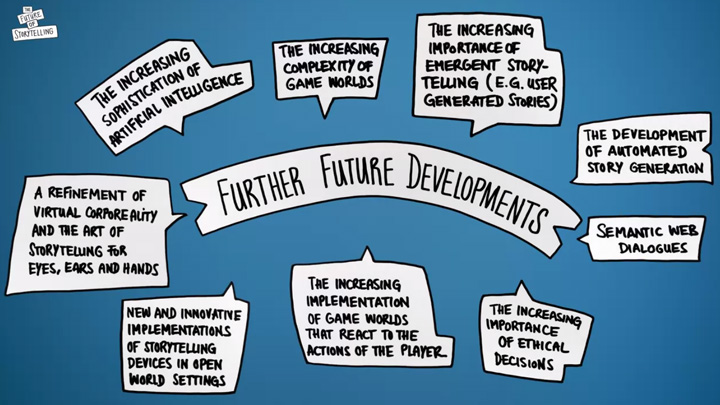 Creative Task of the Week

Please think about which digital game fascinated or impressed you most up to now and tell us why!

I’d like to introduce you to the game To the Moon .

As you can see, it’s not a shooter with super realistic graphics nor an adrenalin re/action based game but rather an interactive and very sensible story (that’s why I choose it for the creative task).

It’s about two doctors travelling through the mind of a dying man in order to fulfill his last wish (hence the title). In this fictional world a technology is developed, which allows doctors to create and embed artificial memories in their patients’ head. So if a changing of someone’s mind is requested, later he/she wakes up with memories of things that didn’t actually happen.

But since these new memories are permanent, a conflict between them and the real memories arise, which leads to a malfunction of the persons body. Therefore, this operation can only be done to people on their deathbeds, to fulfill what they wish they had done with their lives… but didn’t.

Ingame – the lighthouse is an important part of the story

What impressed me most is definitely the true depth of the story and how it is presented.
Playing as the doctors, you enter the old man’s mind and start travelling backwards through his memories. Flashbacks and interactive scenes play an important role and help to develop the story. However, the player has to find out by him/herself what happened in each sequence and why it is important to the overall story in order to influence the patient’s mind.
Through the storytelling it’s so easy to identify with the characters, be it the old dying man or the doctors. I developed a real need to help the old man, wanting to fulfill his last wish no matter the cost.
Furthermore the music is just wonderful. It emphasizes the emotional impact in the scenes and helps to create a beautiful atmosphere. To be honest, some scenes really made me cry …

Ingame – Ghosts of past memories